Indonesian coal exports rose in April from a year earlier led by strong Indian demand. Indonesian authorities are expecting the momentum in shipments to continue this year, helping the country to meet its output target.

Indonesia shipped 33.15mn t of coal in April, up from 31.61mn t a year earlier, the latest customs data show. The increase followed year-on-year declines in the previous two months.

Indonesian coal exports benefited from an increase in demand from India on higher coal burn and an uptick in industrial activity compared with the same month last year, when a nationwide lockdown to curb the spread of Covid-19 dented economic activity.

Exports to China gained on the month but eased slightly from year-earlier levels. The month-on-month increase underscores steady demand from Chinese utilities to meet an expected rise in power demand during the peak summer months, especially as domestic coal supplies are tight.

High prices have encouraged Indonesian suppliers to raise output and exports. Indonesia’s energy ministry (ESDM) said a number of coal producers have submitted proposals to raise production, although it did not mention specific volume additions or the names of the companies.

The ESDM has increased this year’s coal production target by 75mn t to 625mn t on expectations of strong demand, with the increased volume earmarked for the export market. Output totalled at least 239mn t in January-May, according to government data, representing 38pc of the 2021 target.

The ESDM attributed the lag in output to torrential rain in January and February that led to flooding in Kalimantan, one of the country’s largest coal-producing regions. This hampered mining and logistics operations, with coal producers forced to cut back operations as barges were unable to navigate waterways due to swollen rivers.

Production reached 49.73mn t in April up from 44.48mn t a year earlier, provisional government data show, while May output reached at least 46.39mn t, according to government figures. Due to reporting lags, the government’s historic figures are frequently revised meaning production may have been higher than the data currently suggests.

Production in the first five months of 2020 stood at around 239mn t. On that basis, Indonesia would have to produce 386mn t during June-December to meet the 2021 target. It produced 328.93mn t in June-December 2020, suggesting average annual growth of more than 8mn t/month is needed through the rest of the year to meet the target.

The ESDM said that coal prices this year have been stronger than originally anticipated, underscoring robust demand in the seaborne market. It expects coal mining companies to increase output in the latter half of the year to take advantage of high coal prices, which could help the country hit the production target.

But one mining firm told Argus this week that the country could miss the production target and record output of less than 600mn t for the whole of 2021.

The country’s domestic market obligation (DMO) sales have reached 51.8mn t so far this year until May, accounting for 37.7pc of 137.5mn t of the target. Local sales are likely to increase in the coming months with an expected uptick in economic activity and an increase in power demand as Covid-19 cases steadily decline and restrictions ease further. DMO sales dropped sharply in 2020 as a stringent lockdown to prevent the spread of Covid-19 affected industrial operations and demand.

Exports to India, the second-largest importer of Indonesian coal, more than doubled on the year to 9.82mn t in April, which was also up from 8.97mn t in March. Indian demand for seaborne coal may be supported by the peak summer demand season following a steady rise in coal burn in the last eight months to April on a year earlier basis.

India’s overall thermal coal imports also increased in April from a year earlier, ending five consecutive months of year-on-year falls, although the rise was from a low base a year earlier.

A less stringent nationwide lockdown this year has ensured some business continuity despite a surge in Covid-19 cases. This has supported the outlook for economic growth and coal demand from the industrial or non-power sector, including cement and sponge iron mills.

Shipments to China, the largest importer of Indonesian coal, stood at 10mn t in April, easing from 11.8mn t a year earlier, but rising from 9.9mn t in March.

Exports to China are likely to be stable as local supplies may face a further squeeze as cross-province safety checks have started in major coal-producing regions following the latest in a series of fatal mining accidents.

Moreover, China’s customs authorities recently lifted restrictions on coal imports for a few Chinese provinces until the end of June to raise overall supplies and bring down domestic coal prices, although a ban on imports from Australia continues. 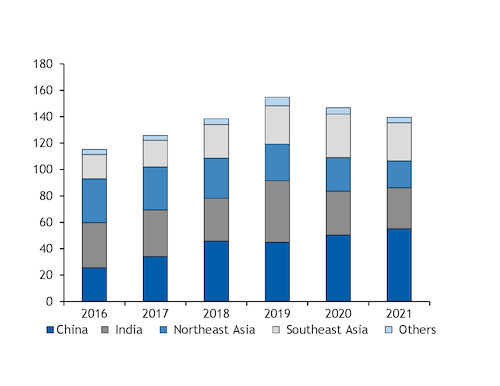 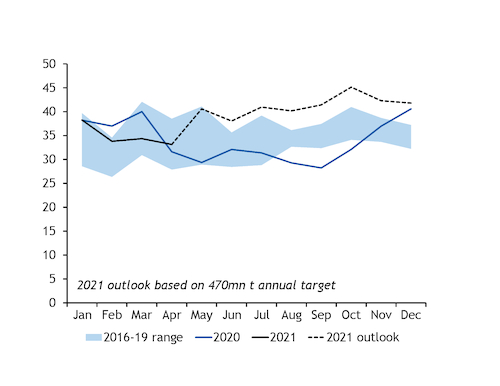 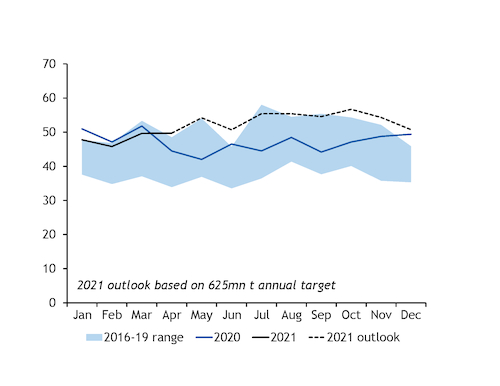