DHL says there can be ‘confusion’ about shipping charges, does not address lack of transparency

Michelle Sinclair says she found out the hard way that ‘import duty/tax and clearance fees’ owed on an imported Irish football jersey were mostly processing fees that went to DHL. (Colin Hall/CBC)

Michelle Sinclair knew her son Aodhan only wanted one thing for this 10th birthday — a football jersey from his favourite team in Dublin, just like the one his dad owns.

So the Calgary mom ordered it online last month and paid $24 for shipment to Canada, using one of the biggest courier companies in the world — DHL, which operates in 220 countries and is known for its bright yellow planes and trucks with bold red lettering.

But two days later DHL emailed Sinclair, saying she had to pay another $23 before the package could be delivered to her door.

“My item is being held for ransom,” Sinclair told Go Public. “It seems a little dirty … [to wait] until you have my package to tell me about all these hidden fees.”

Sinclair is joining a growing chorus of people online who say DHL is using claims of “duty and taxes” to include extra charges that customers feel trapped into paying or risk losing their packages.

“This doesn’t seem to be very pro-consumer,” said Amee Sandhu, a Toronto lawyer who specializes in business law and corporate ethics.

“I don’t understand why the corporation would do something like that. The danger is reputational loss. They’re risking turning off their customers.”

Sinclair says she knew it would cost a little more to have the jersey sent by DHL instead of regular mail, but thought it was worth it.

“We’ll get it here quickly and it’s fine,” she recalled thinking. “At least … that was the plan.”

She was surprised by that email, announcing in red, capital letters that a payment was required for import duty and tax. She owed a further $23.25.

When Sinclair inquired why duty and import fees amounted to $23 on a $68 item, a DHL brokerage supervisor told her imports are subject to “duty, taxes, and other customs related charges” and directed her to the website of the Canada Border Services Agency (CBSA).

But when Sinclair pressed, she learned that only $5.40 was being charged for GST and the remaining $17 plus tax was a “standard processing fee” DHL was pocketing for completing customs paperwork. There was, in fact, no import duty. 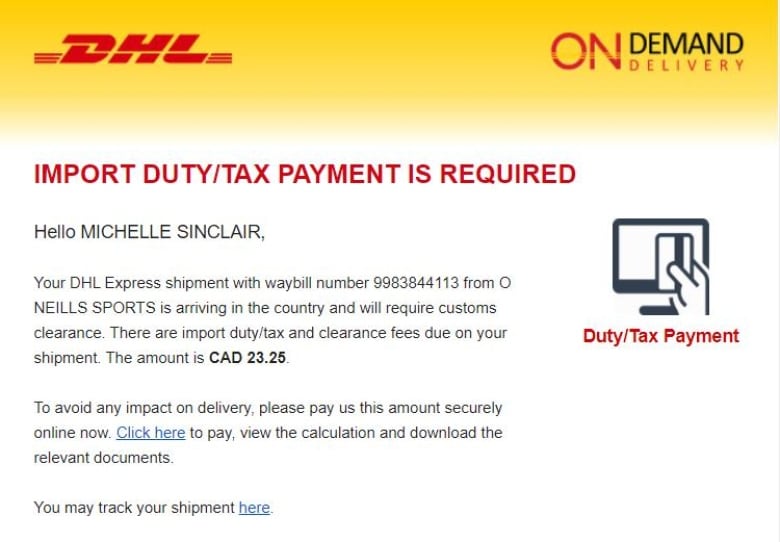 Sinclair says this email from DHL is misleading, because most of the $23.25 fee had nothing to do with duty or taxes — it was a ‘processing fee’ for the company. (Submitted by Michelle Sinclair)

“If it’s a standard fee, it needs to be told,” said Sinclair. “I’ve already paid for you to handle my product. So don’t be sneaky about it.”

Sandhu also says — in the name of transparency — DHL needs to clearly alert its own customers about its fees.

“It’s quite difficult to understand why they wouldn’t just put that [prominently] on their website tomorrow,” she said. “It just sort of boggles the mind why it wouldn’t be made much more clear.”

Such fees could also be made clear on the sites of retailers who use DHL, say critics.

Sinclair says there was definitely no mention of additional fees when she bought the jersey, and double-checked by going through the whole ordering process again — stopping only when the site asked for her credit card.

Anger and frustration over DHL’s “hidden fees” is rampant online — with discussion boards and websites like dhl-sucks.net featuring customer beefs about getting dinged for extra fees when shipping costs have already been paid.

“Every package, I need to pay more,” writes an Alberta customer.

“I paid them out of frustration,” writes another.

“After I paid, they stated … I need to pay more,” posts another.

Go Public requested an interview with a DHL spokesperson, which was declined. In a statement, spokesperson Hazel Valencia wrote that the company understands “there can be some confusion” when it comes to shipping purchased goods.

DHL processes any customs paperwork, said Valencia, “so recipients are charged a nominal fee” for the service.

“We believe this is a service that facilitates the transaction of clearance with Customs, saves recipients the trouble of processing paperwork,” wrote Valencia.

But Sinclair says she would have appreciated a heads up. “We’re a family of five,” she said. “I can’t be getting surprised … for something I just don’t have in the budget.”

Valencia also said that DHL’s customs processing fees are outlined online and provided a link. But for consumers, that information can be hard to find amid the many pages on several DHL websites that only mention duty and tax payments.

Valencia did not address Sinclair’s concerns that the company is not transparent about its processing fee in advance and declined to say whether DHL would take steps to state its charges prominently online or in communications with customers.

George Mulamoottil of Mississauga, Ont., wrote to Go Public saying his shipment of tea left a sour taste in his mouth after DHL tacked on unexpected charges.

The 88-year-old retired environmental biology professor asked his niece to send a favourite brand of white tea from India last August “because it’s delicious and organic.”

“DHL was holding the package for ransom,” he said. “I had a notice on my mailbox — duty is owed, you won’t get the package until you pay.”

Knowing that tea and coffee imported in small quantities for personal use is exempt from such charges, Mulamoottil phoned DHL’s customer service department located in Brampton, Ont., and learned the charge was entirely the company’s “processing fee.”

“This might seem like a small amount, but it’s actually a vast amount they’re collecting if you add up all the people this is happening to.”

Mulamoottil says two years ago, DHL tried to charge him a similar fee, but when he fought back, they reimbursed his credit card.

“This time, they fought me,” he says. “They talked in a very contemptuous manner.”

Niraj Dawar of London, Ont., says the DHL customer service representative he dealt with was worse than contemptuous — he “intentionally misrepresented the truth.”

Dawar, a retired business administration professor, ordered an anti-nausea medicine from India last August and, curious about DHL’s $30.79 charge, asked for a breakdown.

“Canadian Customs is requesting that the duties and taxes of $30.79 be paid,” a DHL representative told him in an email.

As with other customers contacted by Go Public, the representative initially directed him to the CBSA website. When Dawar pressed DHL for more information, he was told there was a “Health Canada” fee, which he later determined actually went to the shipping giant, not the government. He was also charged a processing fee.

“They tried everything to not tell me these were DHL fees,” said Dawar, who had already paid $100 for shipping.

“They don’t charge it at the outset because they’re in a competitive market so they’re underpricing.”

DHL did not respond to Dawar’s allegation that he was misled.

As an expert on corporate transparency, Sandhu, the lawyer, says it’s frustrating to see a corporation make what she says are mistakes that can be easily avoided.

“It really is a case of … self-inflicted wounds,” said Sandhu. “The company could do so much to not have this problem in the first place.”

A problem made worse, says Sandhu, by the internet  that can quickly spread negative coverage of a corporation.

“It travels instantaneously,” says Sandhu. “And that bad smell then … lingers for a long time.”

Sinclair learned there is a way for customers to avoid the courier company’s “standard processing fee” — they can refuse to pay DHL and go directly to the local CBSA office to clear the parcel themselves.

“That should be part of the original email that they send,” said Sinclair. “But they don’t tell you until you complain.”

She won’t be using DHL again any time soon, even though the company delivered her son’s jersey in time for his birthday.

“The smile on your children’s faces always makes everything OK,” she said. “But that doesn’t mean that I will make that mistake a second time.”